Legislative Reform Process differs in Ireland from that of the USA

Ireland and the USA adopt different approaches to the review and repeal of outdated legislation. In Ireland, the tidying of the Statute Book has been approached through a series of Statute Law Revision Acts. In the USA, President Trump introduced Executive Order 137711, in January 2017, to focus on “Reducing Regulation and Controlling Regulatory Costs”. That policy stated that “… for every one new regulation issued, at least two prior regulations be identified for elimination, and that the cost of planned regulations be prudently managed and controlled through a budgeting process”.

Why Repeal Laws and Regulations?

Ireland’s first Statute Law Revision Programme started in 2003. Its purpose was to modernise and simplify the Statute Book by removing obsolete pieces of legislation, in order to reduce its size and make it more understandable and accessible to those who use it. That work continued until the end of 2016. By 2016, six Acts had been enacted – See Table 1. 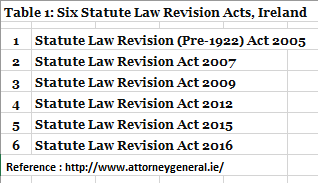 The volume of work was considerable. In that regard, the Minister for Public Expenditure and Reform, Paschal Donohoe, TD, in reply to a Parliamentary Question on 15 November 2016 pointed out that – “ To date, over 60,000 pieces of legislation have been either expressly or implicitly repealed under the programme. Collectively this is the most extensive set of repealing measures in the history of the State and the most extensive set of statute law revision measures ever enacted anywhere in the world”. Nevertheless, the Minister went on to announce that he had decided – “…in view of the progress made, to pause the Statute Law Revision Programme at this time in order that my Department can progress other priorities”.  It is clear that notwithstanding the Trojan work undertaken to date, there is still work needed to complete the work. The obvious candidate to do this work is the Law Reform Commission. The Law Reform Commission Act 1975 states that Commission’s role is to keep the law under review and to conduct research with a view to the reform of the law.

Trump’s Two-for-one Policy
What about the USA’s repeal process? Since 2017, for every one new regulation issued, at least two prior regulations are required to be identified for elimination. The US Office of Information and Regulatory Affairs (OIRA) Statistics, which is part of the Office of Management and Budget (OMB), is responsible for implementing this Executive Order and reporting on its progress. Results for Fiscal Years 2017 and 2018 have been published by OIRA and they are summarised in Table 2. The web reference for OIRA is here.

For Fiscal Year 2017, the table shows that there were 67 regulations repealed and 3 regulations introduced. This suggests a ‘success ratio’ of 22 (67 divided by 3); considerably higher than the target set of 2:1. However, there have been criticisms of the ‘success ratio’. For example, Professor Stuart Shapiro, writing for The Hill, criticised the published ratios. He pointed out that the data used for calculating the ratio – “… includes actions such as delaying regulations that were not yet in effect. Some of these rules will eventually be published. In other cases, agencies have been sued over their delays and may be forced to rescind them The ratio may also include proposals that the Trump administration will never finalize (but were not actually in effect) and counting multiple repeals of the same regulation.”.

For Fiscal Year 2018, Table 2 shows that there were 57 significant regulations repealed and 14 regulations introduced. This suggests a ‘success ratio’ of 4 (57 divided by 14); twice the target set. A recent Brooking Institution publication concludes that the 2018 data are more reliable than those for 2017. Specifically, it states that the inclusion of “significant regulations” – “…is closer to an apples-to-apples comparison, which is more useful when trying to weigh the deregulatory and regulatory actions against each other”. Nevertheless, the Brooking Institution report concluded that the changes introduced – “… have not immunized these counts from continued criticism”. 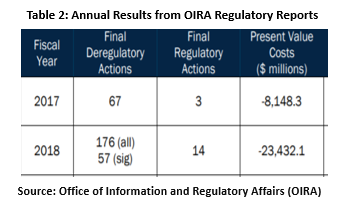 Cost Savings
The Office of Information and Regulatory Affairs (OIRA) also estimates the cost savings emerging from the policy of regulatory change. As shown in Table 2 above, the total regulatory cost savings was over $8 billion in Fiscal Year 2017 and over $23 billion in Fiscal Year 2018. While these are significant savings, some analysts suggest that the basis of the calculations require close examination. For example, the Brooking Institution publication listed above recommends that every regulatory action – “…should publicly disclose the costs or costs savings attributable to that action…This will help the public provide comments on the agencies’ estimates. It will also facilitate verification on the back end when OIRA reports the totals, which is currently not possible for most actions”. The Institution also recommended that – “…Agencies should provide enough detail in their regulatory and deregulatory actions to recreate the cost and cost savings estimates, including key methodological assumptions like the long-term cost pattern of each rule”.

Conclusion
In Ireland, the body of work undertaken in repealing obsolete laws between 2003 and 2016 is impressive. It is clear that notwithstanding that Trojan work, there is still work needed to complete the revision project. The obvious candidate to do this work is the Law Reform Commission. Under the Law Reform Commission Act 1975 it is stated that Commission’s role is to keep the law under review and to conduct research with a view to the reform of the law.

President Trump’s regulatory policy has demonstrated successes with his new policy. However, this policy does run the risk of having unintended consequences. For example, there is a danger that good regulations might be removed, if the ‘two-for-one’ policy is applied too rigorously. It is important that good regulations are not lost sight-of. After all, it is good regulations that create the standards and rules that govern the way markets operate, that provide customers with reassurance as regards the quality of the products and services they buy, and that make sure that government works well at central and at local level.

Tom Ferris is a Consultant Economist specialising in Better Regulation. He lectures on a number of PAI courses and blogs regularly for PAI. He was formerly the Senior Economist at the Department of Transport